The cricket ground has two important parts, the field, and the pitch. Both of them have different measurements and functions. Let’s take a closer look.

Parts of a Cricket Ground

The pitch is a small strip in the middle of the ground. It has both creases and stumps. On the other hand, the field is the space inside the boundary line excluding the pitch. There are many other terms used to define the various parts of a field.

Generally, the field is oval. However, it’s not a thumb rule. The field is divided into small parts, including close-infield, infield, and outfield. The grasses on these areas are longer when compared to the greens on the pitch. 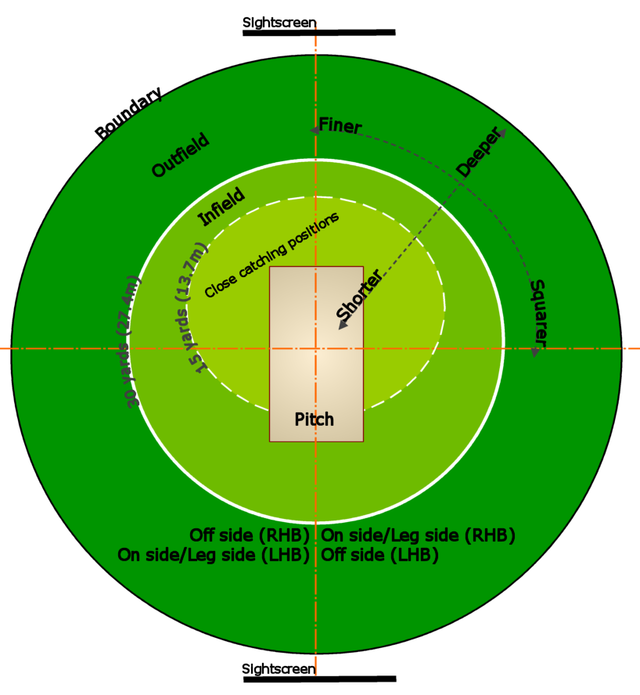 Dimensions of a cricket ground

The diameter of a cricket field differs. It could be anywhere from 450 to 500 feet (137 to 150 meters). The minimum and maximum diameters are defined by ICC Standard Playing Conditions. The field has a boundary line on its perimeter. The structure of a boundary line is not defined by cricket laws. However, it should be seen by the players and audience. Generally, a rope or white line is used to define the boundary. The advertisement boards have to stay 2.74 meters away from the boundary.

Players on the ground

All the members of the fielding team have to be present on the ground when the ball is delivered. None of them can stand on the pitch. The batter triy to hit the ball away from the standing fielders to score runs. If the ball passes the boundary line, it’s declared as a boundary. The decision or four or six depends upon whether the ball touched the ground after leaving the bat or it never bounced.

The fielding captain places his team members everywhere on the field, except the wicketkeeper and the bowler. The wicket-keeper stand behind the stumps, and the bowler bowls.

Dimensions of a cricket pitch

You can quickly identify a pitch because it has crease marks and stumps at both ends. Plus, its grasses are comparatively shorter than the rest of the field. The batters take their stance in this region, and bowlers deliver balls. In other words, most essential incidents of a cricket match take place on the pitch. There are different types of pitches depending upon their content and conditions.

The measurements of a cricket pitch are the same for a long time, and they might not change. A cricket pitch has to be 22 yards long and 10 yards wide. For better understanding, its 20.12 meters long and has a width of 3.025 meters.

The pitch has three different creases, popping, bowling, and return. They exist to guide the batters and bowlers about their respective playing areas.

Players on the pitch

The batters spent most of their time on the pitch. The on-strike batter takes the stance on one end of the pitch, and the non-striker stands on the other end. The bowler starts the run-up from the bowler’s end. The bowler has to deliver six balls in each over. Once the over finishes, the on-strike batter changes. Now the non-striker will face the deliveries after the bowler is changed. The umpire stands behind the stumps on the bowler’s end.

Does the cricket ground size vary according to the format?

Is the ground size different for women’s cricket teams?

Yes, the size of the ground is different for women’s cricket. The shape is oval, but the dimensions differ. The ground and stadium remain the same, the boundary line is moved inwards. Check the image for a better understanding. 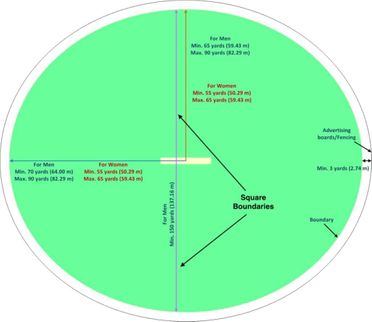 What is a boundary on a cricket ground?

What happens if there is an object inside the boundary?

Such incidents are rarely possible in modern cricket because most stadiums are built according to international standards. However, some old venues have trees inside the field. Such a stadium has different playing rules. For instance, if the ball hits the tree after or without bounce, it’s considered four runs. But, the batter remains not out if the fielder catches the ball after it bounces off the tree.

If an animal or bird comes inside the field in between the ball and the boundary, then it’s not considered four runs. The final decision depends upon the on-field umpire.

Which is the largest cricket ground in the world?

Cricket is one of the most popular games, and there are multiple stadiums for this sport. The size of a cricket ground depends upon two factors, the size of the boundary and capacity. The largest cricket stadium according to the boundary size is Sydney Cricket Ground (SCG), Australia. It has the longest straight boundary of 93.72 meters. Keep in mind that the actual boundary size can be decreased on the day of a cricket match.

Narendra Modi Stadium, India is the largest cricket ground in terms of capacity. It can accommodate 110, 000 cricket lovers. Melbourne Cricket Stadium (MCG) is the second with a capacity of 101,024. You might not know, but Eden Gardens, India also had a capacity of more than 100000. But, it was renovated to match the standards of the 2011 World Cup. The stadium now has upgraded facilities for players, but the capacity is reduced to 66000. Still, it is the third largest cricket stadium.

Cricket has a wide terminology. So, it’s important to understand that the pitch and field are different parts of a cricket ground. The primary action takes place on the pitch where the batter and bowler engage. The fielders are waiting for the ball to enter the field so that they can catch and return it to the keeper or bowler. The field is further divided into infield and outfield. And also leg side and off side.

On the other hand, the field does not have fixed dimensions. The size differs according to the venue. Generally, small grounds are preferred for ODIS and T20s. The test matches are better inside a large ground to make the right balance between the batting and fielding units.