Australia has given us a lot of talented cricketers. But, the kangaroos have overshadowed all other nations in terms of pace attack. Whether we talk about tests, one day internationals or twenty-twenty cricket, Australia always has a set of fast-bowlers who can terrorize any batter in the world.

Let’s take a look at some of the finest pacers the country has produced. Most of them are not actively bowling in any format of cricket. However, they can still give current greats a run for money. 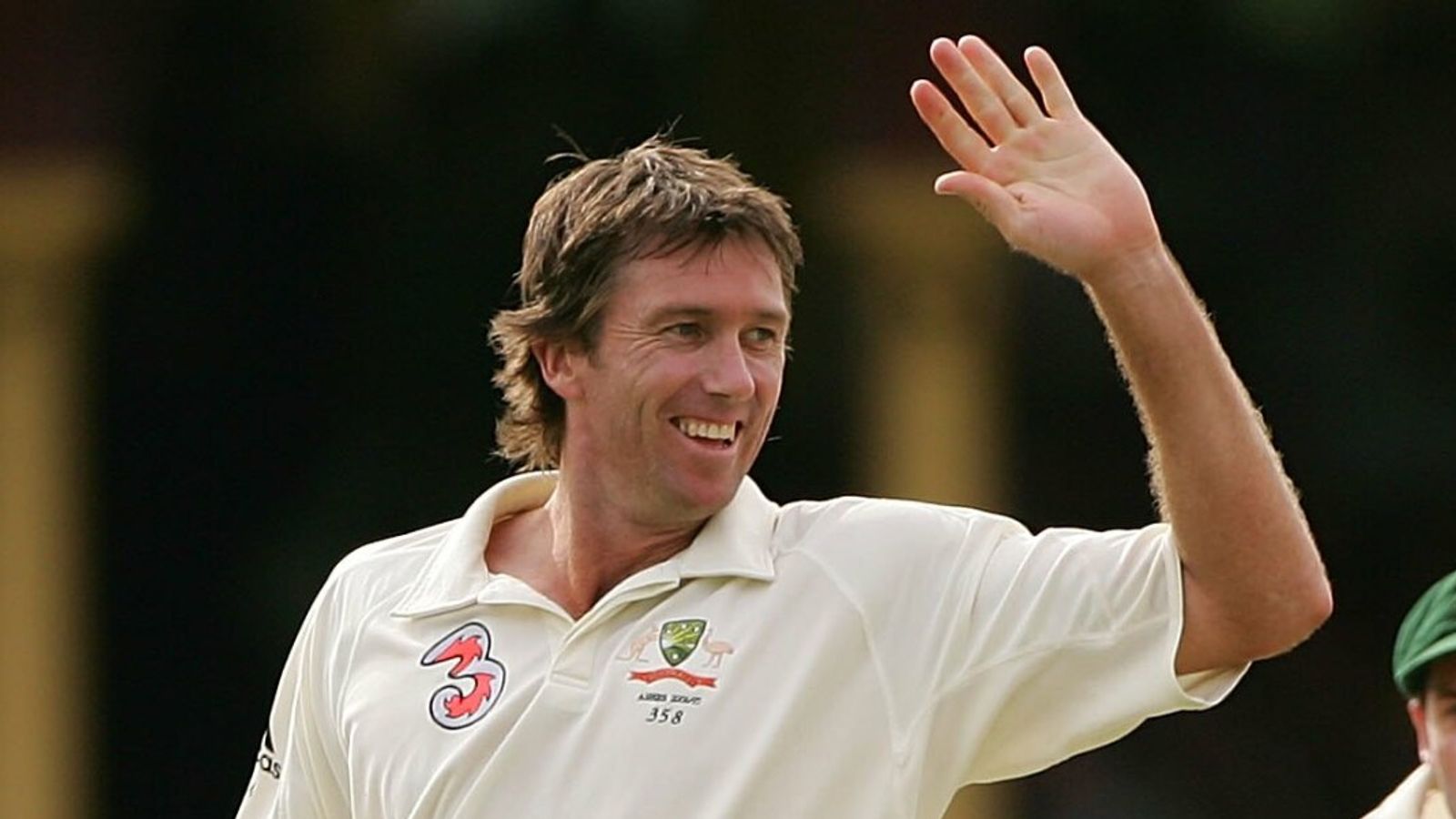 You might have guessed who will the first to appear in this list. Glenn McGrath is arguably the greatest pacer of all time. He was one of the reasons why Australia dominated the cricket world in the 90s and 2000s. McGrath is not the fastest. However, his incredible line and length made him a bowler who can break any partnership.

Glenn McGrath is the highest wicket-taker of Australian national cricket team. Three ten-wicket haul and 29 five-wicket celebrations can tell you how terrific he used to be. Apart from that, he has taken a couple of 8-wicket hauls. His best is against Pakistan, 8/24.

Not only tests, but Glenn is also a leading wicket-taker in one day internationals across the globe. His best came in 2003 World Cup against Namibia. Now you can understand why Australia won three world cups from 1999 to 2007.

Glenn gave his best in 1999 World Cup. He was the second leading wicket-taker. McGrath sent 18 batters to the pavilion. The 2003 season was even better. McGrath took 21 wickets. In 2007, he was at the top with 26 wickets and was named as the Player of the Tournament. You might not be surprised to know that McGrath is the highest-wicket taker in the ICC World Cups till now. 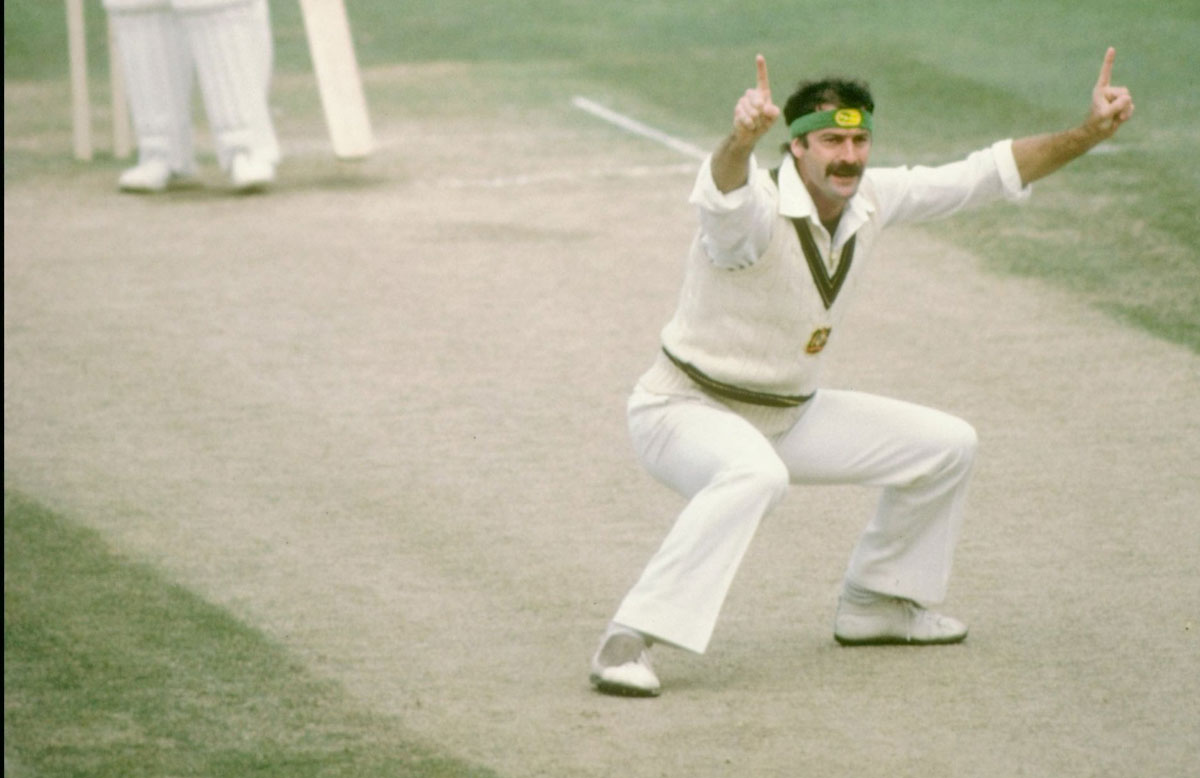 Denis Lillee is different than McGrath. He used to bowl with significant pace to generate fear in the mind of batters. Lillee made a dangerous pace attack combination with Jeff Thompson in the Ashes Series of 1974/75.

A shining moustache and hairband made Lillee a distinctive figure in the world of cricket. He used his bowling speed as a weapon to gain upper hand on the batters. He made his test debut in 1971 against England. The Ashes was his favorite tournament.

Dennis Lillee appeared in 70 test matches, ended 355 innings and 7/83 was his best. He played 70 one day internationals and took 103 wickets. Lillee could have played more and done better, but stress fractures disturbed him a lot. Still, Lillee was named as the best Ashes Xi in the last 40 years in 2017.

Brett Lee is one of the fastest pacers Australia has produced till now. His carrier begin in 1999 and soon he became an irreplaceable asset of Australian national cricket team. Lee was able to bowl continuously at a speed of 150 km/h. It was one of the reasons of his injuries. Ultimately, Lee changed his strategy. But, he is a nightmare for almost all the batters.

Brett Lee was an active pacer for around 13 years. He has 310 test wickets comprising ten five-wicket hauls. His career best is 5/30. Brett Lee has 380 wickets in ODIs and his best performance is 5/22. He helped Australia win 2003 world cup by taking 22 wickets, which also comprise a hat trick against Kenya in super sixes. He is the first Australian to enjoy a hat-trick in world cups. 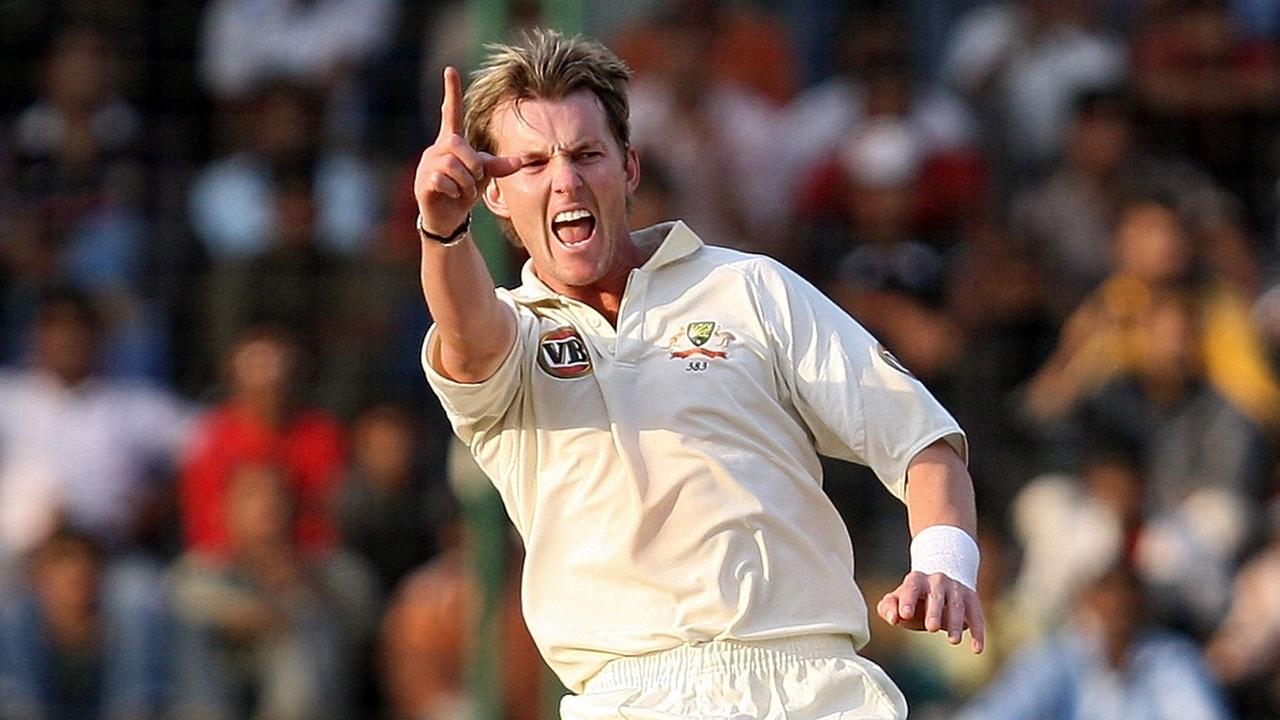 Lee is the first pacer to claim hat-trick in T20s. Bangladesh suffered his wrath in 2007 T20 World Cup to lose three wickets. Lee’s fastest delivery is 161.1 km/h in 2005 against New Zealand.

Mitchell Starc is a left-arm pace bowler, still playing in Australian national cricket team. At the time of writing, he has claimed 287 wickets in the test, 195 in the ODIs and 63 in the T20s. Starc has not hanged his boots yet, so he has time to retire as one of the greatest pacers of all time.

Starc has pace, but he can also swing the new ball. Reverse swing is one of his unique weapons. If Starc’s line and length is right, then he is almost unplayable by any batter across the globe. We hope he keeps firing at such strength in the upcoming T20 World Cup.

Australia is the land of pace bowlers and Josh Hazlewood is another fine speedster who can be effective in any era of cricket. Josh has multiple qualities that makes him a fearsome fast-bowler. His wrist position is strong, which helps him to generate significant movement off the seam. Moreover, he can swing the ball at his will, especially if the conditions are favorable.

Josh Hazlewood has taken 215 wickets in only 57 test matches. He also has 97 wickets in 61 one day internationals. Josh is 31 in 2022. So, this right-arm fast-medium bowler could be Australia’s leading wicket takers if he plays for a few more years. 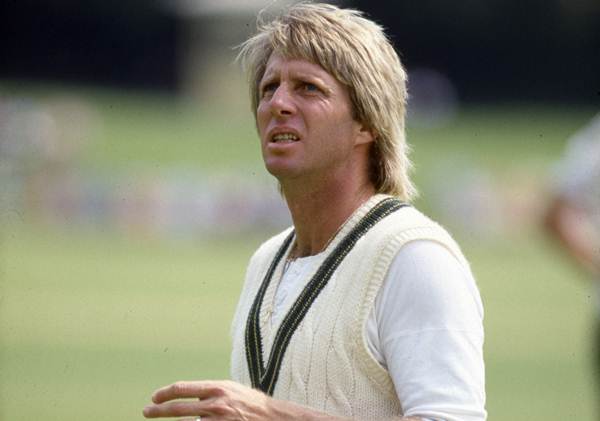 Jeff Thompson was a threat for all the batters. However, his debut was not what he might have expected. In 1972, Jeff played his first test against Pakistan. But, the statistics of 0/110 was not impressive. Reportedly, he was in the ground with a broken bone.

Thompson was not playing first class cricket for a couple of years due to the broken foot. He came back in the 1974-75 season. Then, he produced some incredible spells in The Ashes with 6/46 as his best. Such a performance brought Thompson in the limelight and cemented his position in the Australian national side.

Thompson claimed 200 wickets in the tests and 55 in ODIs. He played the 1975 and 83 World Cups and claimed seven wickets. Jeff Thompson and Dennis Lilliee was one of the most fearsome pacers in the test cricket. The former was included in the Australian Hall of Fame in 2016.

Charlie Turner is one of the greatest bowlers of all time and the best in the 19th century. He was popular for his long run ups, pace variation and accurate line. His international career lasted from 1887 to 1895. He claimed 101 wickets only in 17 test matches at an excellent average of 16.53.

Turner was also known as The Terror. He was able to control the line and length even on tricky pitches. Charles has two ten-wicket and 11 five-wicket hauls under his belt. He was the first ever pace bowler to claim more than 100 wickets in test cricket. His career best came against England in 1887 at Sydney cricket ground. 12/87 is still the best bowling figure at SCG. 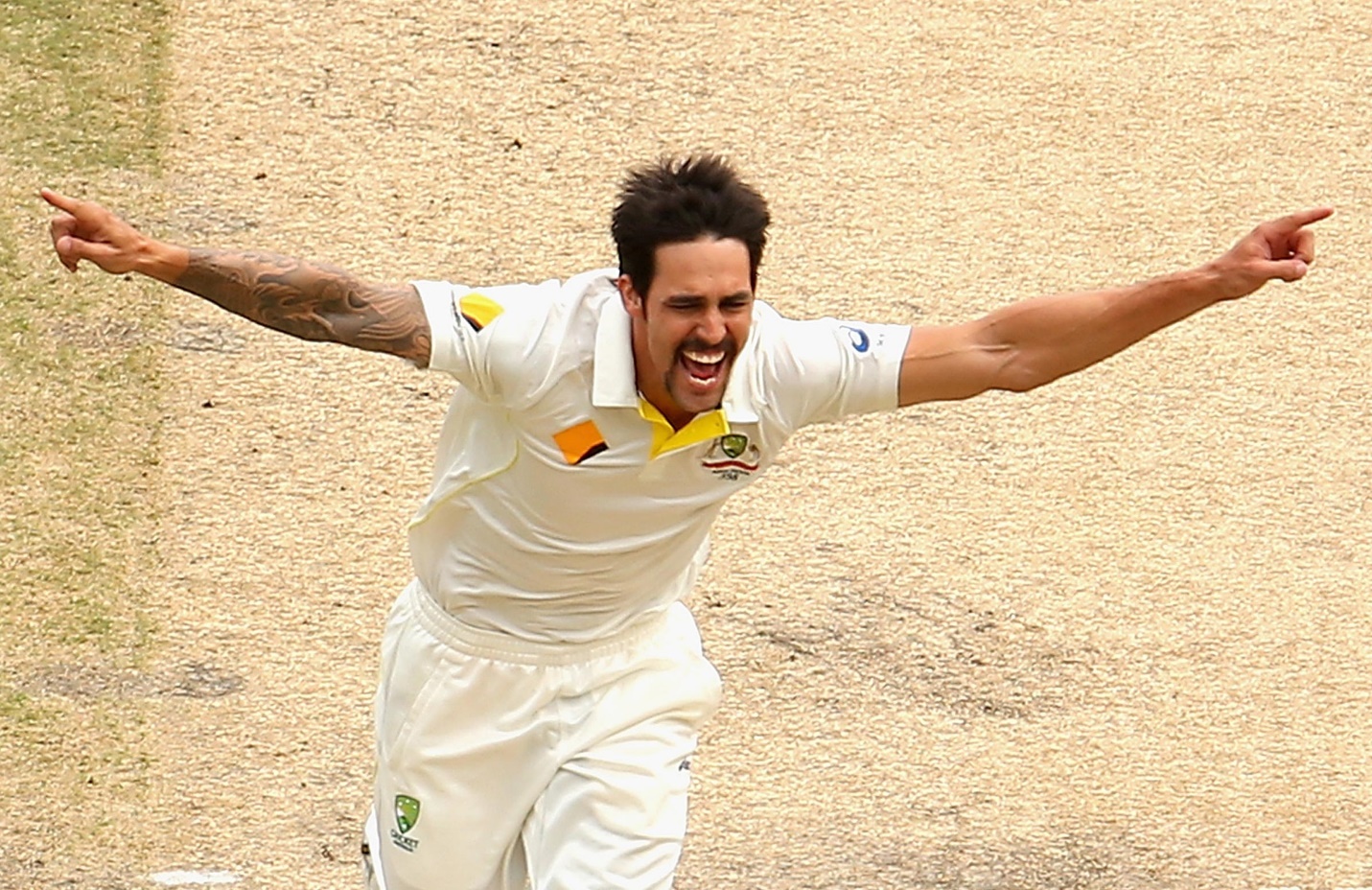 Mitchell Johnson was one of the best fast-bowlers during late 2000s and early 2010s. Almost all the batters used to worry about his spell. Johnson debuted in 2005 and with a few years he was an inseparable part of Australian national side.

Johnson is the quickest bowling to reach 150 test wickets. He achieved this feast within 2 years and 139 days. The left-arm fast bowler is the 4th highest Australian with 313 wickets, comprising 12 five-wicket celebrations. His best came against South Africa when he claimed 8 batters and gave mere 61 runs.

Johnson has 239 wickets in one day internationals, which includes three five-wicket hauls. His best is 6/31 against Sri Lanka. He was in the playing eleven during the world cup 2007. In 2011 World Cup, he claimed 10 wickets, but Australia was out of the tournament during quarter finals. However, Johnson picked 15 wickets in the 2015 World Cup and helped Australia to win their 5th title.

Jason Gillespie used to bowl in the strongest era of Australian bowling. The country’s national side included Shane Warne, Brett Lee, and Glenn McGrath in these years. Still, Gillespie made his mark by taking 259 wickets in the tests, sixth highest by an Australian pacer. In one day internationals, he has 142 wickets under his belt.

The tall right-arm fast bowler debuted in 1996. Soon in 1997, his place was fixed in the Australian national team because he celebrated a couple of five-wicket hauls. One of them was against England and his test career best. 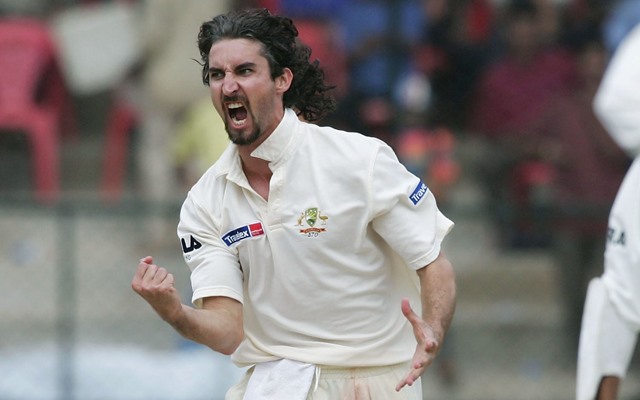 Gillespie has three five-wicket celebrations in one day internationals and his best was against Pakistan in 2002. He was also a member of 2003 world cup winning Australian side. You might be surprised to know that Gillespie is also a useful batter. He hit a double century in 2006 against Bangladesh. 201 is the highest score by a night-watchman.

Also known as Dizzy, Gillespie picked 400 international wickets even after regular injuries. Imagine what he could have done if he played for a few more years.

You might be surprised to see Shaun Tait’s name in this list because he played only three tests and 59 ODIs. However, these appearances was plenty to prove his mettle. Shaun’s fast bowling speed made him one of the most dangerous bowlers.

Shaun Tait claimed only five wickets in tests and 62 in ODIs. His best performance in one day internationals was 4/39 with an average of 23.56. Shaun’s statistics in T20 is also impressive. 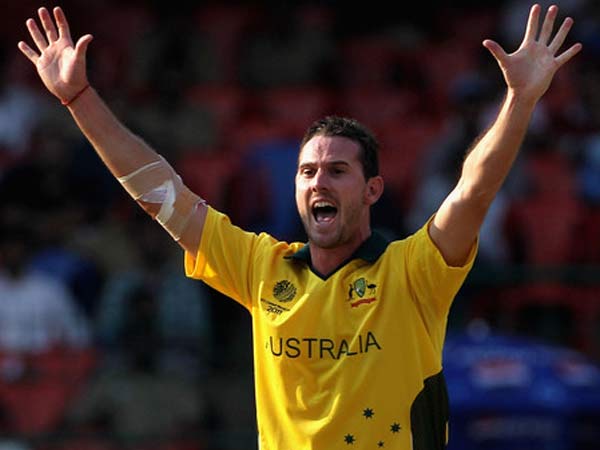 Shaun could have ended his career as one of the leading Australian wicket takers, but injuries were a constant problem. However, he was pretty quick when fit. Since February 2022, he is the coach of Pakistan cricket team.