Do you watch cricket? Then, it’s crucial to understand the various signals of an umpire. Otherwise, you might not be able to enjoy the game. So, read on to understand cricket umpire signals and what they mean illustrated with images.

Cricket Umpire Signals: What They Mean 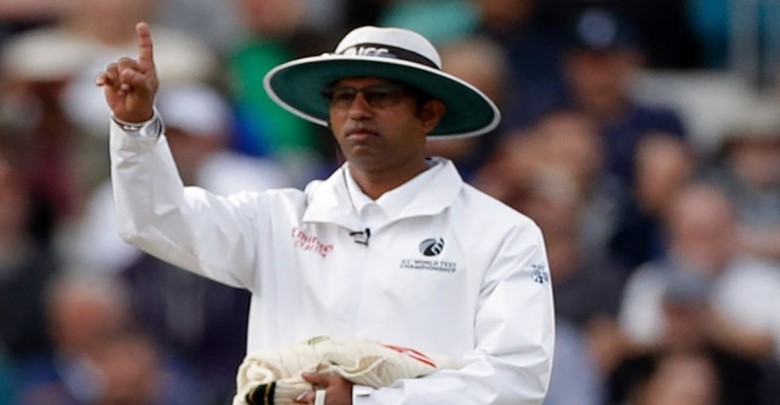 An umpire signals out when a batter gets out by any of the ten methods. The umpire raises the index finger to signal out. However, the fielding team has to appeal in case of LBW and caught behind.

Result: The batter has to leave the field and go back to the pavilion or dug out. 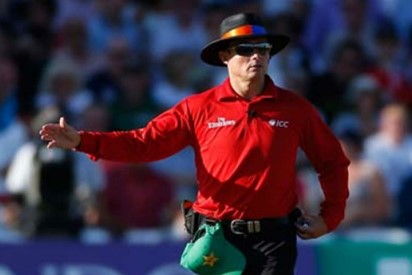 Signal: An extended arm at 90 degrees.

Result: The batting total gets an addition of one run.

A free hit is followed when a bowler delivers certain no-balls. It’s only signaled in short formats of cricket, including one-day internationals and T20s. The batter can hit the ball anywhere without the fear of losing his or her wicket. Do you know why? Because the dismissal methods of a batter reduce to four instead of eight.

Signal: The umpire takes one finger above his head and makes a circular motion.

Result: The batter is allowed to hit the ball without any chances of getting out, except running out, field obstruction, and double hit on the ball.

If the ball passes the batter, but he or she cannot reach it in a normal stance, the umpire signals wide. The pitch has a couple of lines to determine the reach of a batter. In addition, a bowl is wide if it bounces significantly above the batter’s head. A wide ball is not considered a legal delivery.

Result: One run is added to the batting total, and the bowler has to deliver the ball again. 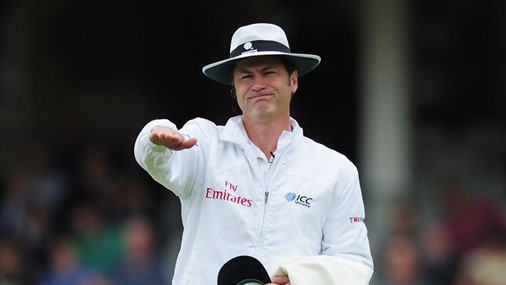 The umpire signals four runs once the ball passes the boundary after at least one bounce. If the four runs came via leg-bye, wide, no-ball, or bye, then the umpire makes a relevant signal before sweeping his or her right hand.

Signal: Right hand is swept across the body a couple of times.

Result: The batting total gets an addition of four runs. 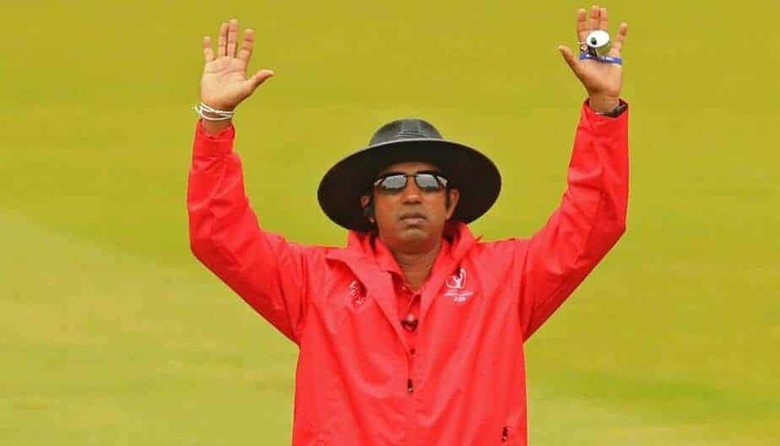 Once the batter hits a ball out of the boundary without any bounces, the umpire signals six runs.

Signal: Both the hands of an umpire go above the head.

Result: The batting total gets an addition of six runs.

A bye is signaled when the ball passes the batter and he or she is unable to touch it but takes runs. The umpire signals bye only when the bowl goes to the keeper without any interruption.

Signal: One arm extended over the arm.

Result: The number of runs gets added to the batting total. 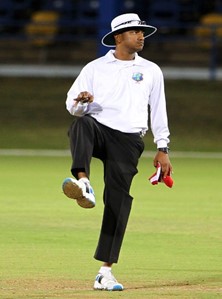 The batting team gets the leg bye runs when the batter hits the ball with any other body part, except the gloves.

Signal: Raising one knee and tapping a couple of times on it with the hand.

Result: The number of runs scored by the batters is added to the batting total. 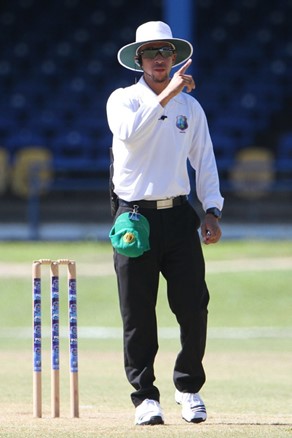 You might have seen pace balls passing over the batter’s shoulder. It’s where the umpire signals bouncer. The bowler can only bowl two bouncers per over in ODIs and one in T20s. If the bowler exceeds the pre-determined numbers, the delivery is a no-ball.

Signal: Tap on the right shoulder.

Result: The umpire tells the batter and bowler about the number of bouncers bowled using his/her fingers.

Signal: Creating a TV-like square with the hands.

Result: The third umpire comes into action, check the given decision, and announces the result.

A lot of circumstances lead to dead balls. Generally, the umpire signals a dead ball when the batter leaves the pitch or pulls away when the bowler is on his/her way. Similarly, a dead ball is given if the bowler starts running, but does not bowl. The umpire uses a similar signal when the third umpire gives not out on a DRS.

Signal: The umpire sweeps both the arms across the knees to signal a dead ball.

Result: A dead ball is not counted as a legal delivery. So, the bowler has to bowl once again. 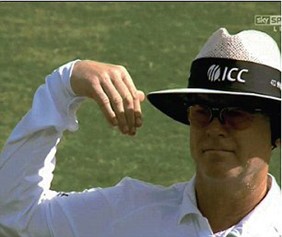 The batting duo has to cross the creases on both ends to complete the runs. If any the batting duo misses crossing the crease using his/her bat, then the umpire declares it as a short run.

Signal: The umpire extends his/her hand and taps it on the shoulders.

Result: None of the incomplete runs are added to the batting total.

Here comes one of the most punishing umpire’s signals, penalty runs. It happens whenever cricket laws are broken by the opposition team. For instance, when a player damages the pitch even after a verbal warning by the umpire. A penalty run signal is also given when any fielder obstructs the batter or wastes time deliberately.

Signal: Hands across the chest, on the shoulder. If the umpire taps his/her shoulders, the batting team gets the runs. On the other hand, the runs go to the fielding team if the hand stays still.

Result: Five runs are added to the team as per the umpire’s signal. 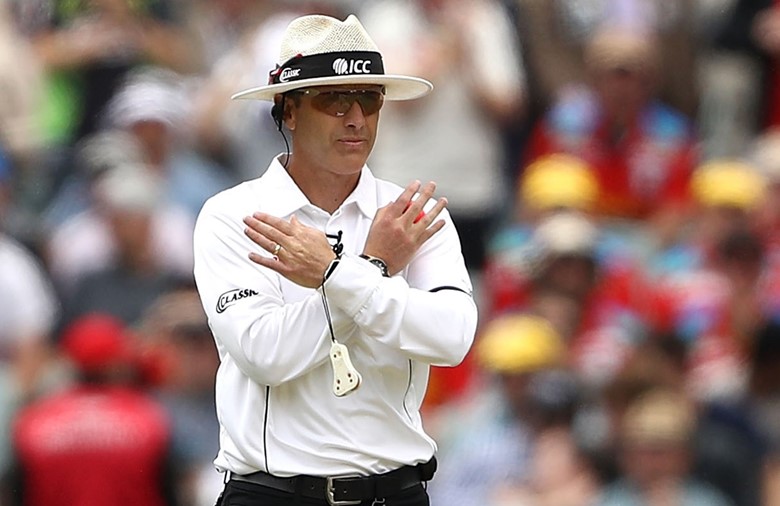 Signal: Hands crossed across the chest and a sweeping motion below the chest.

Result: The given decision is revoked.

The powerplay comes into effect in short formats of cricket, including ODIs and T20s. The field settings change once a powerplay is announced by an umpire. It gives fair chances to the batters and helps them to score well.

Result: Powerplay starts and the fielding team has to follow the field restrictions.

Signal: The umpire makes the signal in between the chest and waist.

Result: The third umpire either approves the soft signal or ignores it depending upon the review. 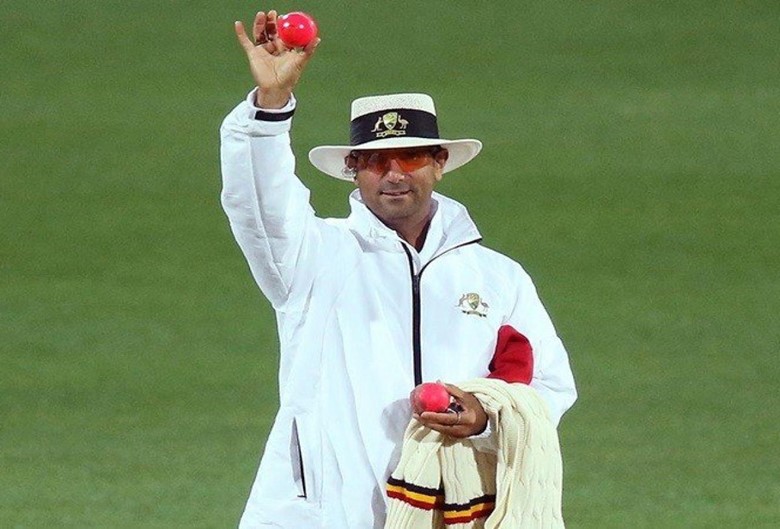 The cricket ball can be replaced after every 80 overs in first-class cricket.

Signal: Once the new ball comes into the picture, the umpire lifts it, and signals to the scorers and the batting unit.

Result: Both the playing teams have to use the new ball. 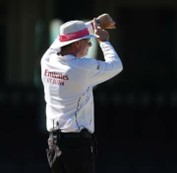 First class and test cricket have a rule that the fielding team has to play around 15 overs in the last over.

Signal: Wrist in horizontal direction and finger pointing to the watch.

Result: The last hour of the play comes into the picture.

Umpires are human, and humans can make mistakes. If the umpire gives an incorrect decision, he/she can change it.

Signal: Arms crossed in front of the chest and touch the shoulders.

After reading all the umpire signals, you can easily understand cricket and its commentary. You can also use this knowledge in your cricket team. Be it street cricket or nationals, the umpire signals stay the same. So, you can be the empire in any team.